For many, nuts are heat pumps to avoid, especially if the goal is to lose weight. With more than 600 calories per 100 grams, and high in fat, they are a nutritional nightmare for those who live counting calories and buying light products.

Today we will see if nuts really make you fat, which ones are the best and how many you should eat.

Nuts are a good example of the mistake of focusing too much on energy balance. Of course calories matter, but their source matters more.

And according to scientific evidence, nuts are not associated with greater weight:

What is this caloric paradox due to? At the time we saw some factors that explain why the same calories have different effects depending on the food, and nuts stand out for several of them:

For all this, add 300-350 calories daily of nuts does not produce weight gain (study, study, study). But its benefits go far beyond not gaining weight.

Nuts are potential trees, and they contain all the nutrients necessary for their development, along with a good combination of protein, fat and carbohydrate.

They share a similar nutritional composition, but each stands out for something particular:

This nutritional richness is expected to be associated with lower mortality, and it is what science reflects.

Let’s start by talking about heart, where attention was initially focused:

Tips for consuming them

In general, the closer a food is to its natural state, the more benefits it will provide. Therefore, whole, unprocessed nuts they are the ideal option. They maximize satiety and minimize caloric absorption.

If you buy them with the shell, even better, because you will consume less. Partly because you have to put in more effort, but also because shell buildup acts as a visual reminder how many you have eaten (study).

What quantity would be recommended? According to the studies, 30-50 grams diaries they do not produce weight gain and provide all the benefits mentioned. Eat the ones you prefer, ideally combined. Do not forget the skin in almonds, hazelnuts and pistachios.

Even toasted and salted provide benefits (study), but present some problems:

We would continue with the creams or butters. Nutritionally they are less recommended, showing, for example, a lower capacity to reduce triglycerides (study), but above all provide more calories and produce less satiety. You can include them in moderation, but the risk of overeating is real. If you buy it, let it be 100% dried fruit, without sugar or additives. 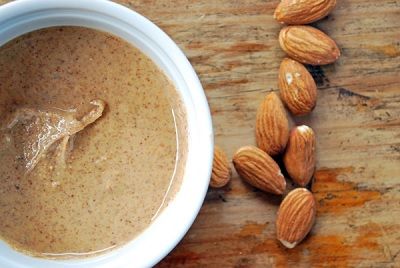 Finally, the almond flours or other nuts. They are gluten-free and much more nutritious than cereal flours, but absorbable calories increase (study), especially with very fine flours.

When making flour, antioxidants are also lost (study). If you make desserts or cookies by mixing other ingredients, such as butter or sweeteners, the combination will be especially palatable, surely increasing the total intake. I recommend limiting the flours to specific times.

As always, context matters. If your goal is to increase caloric intake to gain volume, you have more freedom with creams and flours.

When we talk about nuts, two potentially problematic aspects are often mentioned: their low Omega 3 / Omega 6 ratio and his high phytate content. Let’s do a quick review of both.

Both fatty acids are essential and play their role, but health requires a proper balance. We evolved with an O3 / O6 ratio of 1: 1 to 1: 3, while we are currently closer to 1:16 (study). As this ratio increases, health worsens (study, study).

But as always, not only the ratio of these fatty acids matters, but also their origin. The imbalance in our diet has not been produced by a crazy consumption of nuts, but by the increase of a food unknown to our genome: vegetable oils from seeds.

What’s more, an excess of Omega 6 can produce Omega 3 deficiencies, let’s see why.

Plant foods include linoleic acid (AL) as the main type of Omega 6 and alpha-linolenic acid (ALA) as a type of Omega 3. But these fatty acids are not directly usable by the human body, who you must convert them to your animal version: arachidonic acid (AA) from AL and eicosapentaenoic acid / docosahexaenoic acid (EPA and DHA) from ALA.

These conversions are low overall (depends in part on your genetics), and they also share metabolic pathways, competing for the same enzymes. Increasing the consumption of AL could further reduce the conversion of ALA to EPA and DHA (study, study), increasing inflammation.

But there are two important aspects that downplay this ratio:

For all this, I would not worry too much about the Omega 6 in nuts.

And what about phytates?

Plants want you to eat their fruit, not their seeds. To defend them, they use chemical weapons, mainly phytates and lectins.

Nuts have enough phytates, and their main mission is to inhibit the absorption of nutrients in the animal that eats them, in this case us (study, study, study).

However, in the context of a good global diet, which prioritizes foods of high nutritional density, the phytates in nuts are not of concern, and in fact they can be protective.

Phytic acid has a dark side, but also a more benevolent one: it can act as an antioxidant (study), and is even being studied in cancer therapies (study, study, study).

In any case, a simple recommendation to minimize nutrient loss is eat the nuts as a snack, thus avoiding stealing nutrients from other foods. At least one study shows better results when eating nuts as a snack, but it is not relevant either.

On the other hand, we know that soaking cereals and legumes reduces their phytate content, but it is not clear that this process has the same effect on nuts (study). Surely it is not worth it.

In summary, if nuts were the basis of your diet, excess phytates could become a problem, but in normal amounts you should not worry. As long as you are not allergic, eat them without fear.