Long before the mutation that allowed us to drink milk spread, the first farmers discovered a way to digest this food and make it more durable. It was the beginning of cheese.

Fermentation greatly reduced lactose, so we ate cheese and yogurt before starting to drink milk (detail).

But while yogurt is generally accepted as a health food, many diets recommend cutting out cheese, for fear of its fat and calories.

Today we explore the benefits of cheese, how to select it, recommended dosages, and some possible risks.

For starters, cheese is a good source of protein, and it contains a decent amount of minerals and vitamins, such as calcium, zinc, phosphorus, vitamin A, and vitamin B12.

Despite its saturated fat and cholesterol, it does not affect the lipid profile, and according to this study it improves it. Butter however increases total cholesterol and LDL, but also HDL.

As this review indicates: «The supposed detrimental effect of saturated fats on cardiometabolic health is nullified when consumed as part of complex food matrices, such as cheese and other dairy products. Therefore, the focus on low-fat dairy in the current guidelines is not supported by the existing scientific literature.«. This study attributes the protective effect to the fat globule membranes of unrefined dairy, although we know there are other aspects. Food is more than the sum of its compounds.

And although we do not usually think of cheese as a probiotic food, traditional cheeses are an interesting source of beneficial bacteria (study), although to a lesser extent than yogurt or kefir. They produce more butyrate than milk (study), contributing to better intestinal health and less inflammation (study).

As always, the origin matters, and we are better adapted to the cheeses that we have consumed for the longest time.

Charles de Gaulle complained about the difficulty of ruling a nation with 246 different types of cheese. The French eat an average of 27 kg of cheese per year, three times that of the Spanish (detail), and are in good health and slightly overweight. For some researchers, their cheeses are a centerpiece in the famous French paradox (detail). Of course there are many other factors, but without a doubt traditional cheese is real food.

The cheese Gouda it produces a particularly beneficial effect on cholesterol (study), and is also linked to less breast cancer, with a clear dose-response (study). It may be due to the conjugated linoleic acid (CLA) present in the fat of some cheeses (study, review, study), known for its anticancer properties (study, study, study).

Regarding the level of maturation, it is up to you. The more cured, the less lactose. If you tolerate it well, you can choose cheeses like Feta. In general, sheep cheeses provide more LAC than those of cow or goat (study). Greece, for example, has the lowest rates of breast cancer and the highest consumption of this cheese, and some assume causality (study).

But low-fat cheeses are no better for your heart (study). Cheeses such as Gouda or Brie they contain good amounts of vitamin K2, present in few foods, and relevant for bones, teeth and heart (study). This vitamin is best absorbed with fat (study).

If you like strong flavors, try blue cheeses, such as Roquefort, Cabrales or Gorgonzola. They incorporate fungi such as Penicillium, which can help reduce the risk of infections and coronary heart disease (study, study). 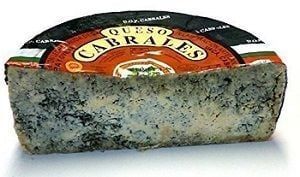 In white rind (and edible) cheeses such as Brie, Camembert or Goat’s ruller Molds of different species also participate, being able to favor intestinal metabolism (study).

And although there are fewer studies, good cheeses manchegos they are not left behind either.

Real cheese requires few ingredients: milk, dairy cultures, salt, and rennet. The same does not happen with processed cheeses, such as the typical melted in slices.

You can forget about most of the benefits mentioned so far.

On the other hand, the more processing and packaging, the more risk of contamination, for example with phthalates, a known endocrine disruptor (detail). Although not worrisome in small quantities, an independent review shows how its presence rises as the cheese is processed.

You can eat it occasionally, but always in less quantity than real cheeses.

In last position are the substitutes, where not even a dairy appears in the first positions. They are made from refined oils and starches, with a little cheese to give them flavor.

They are used many times in pre-cooked dishes and commercial pizzas.

As always, the most important thing is to check the labels. Don’t get it with cheese!

Despite the benefits of good cheese, you must see it more as a supplement than as a staple food in your diet. Unlike for example vegetables, more is not better.

Some studies find a U-shape in its relationship with mortality, that is, eating a little cheese is better than eating nothing, but eating it in moderation is better than doing it in excess. This meta-analysis finds the greatest reduction in cardiovascular risk with 40g / day, and a similar amount recommends this study to minimize the risk of stroke.

Although individual factors would have to be considered, a daily serving of 30-50 gramsRotating different types of traditional cheeses is ideal for most.

I personally prioritize yogurt and kefir over cheese, but I eat artisan cheeses several times a week in salads, scrambled eggs, or as a dessert with a little fruit.

A study on the most addictive foods was published a few years ago, and the sensational headlines were swift.

Is cheese a new dairy drug? Obviously not. For starters, cheese ranks 16th on this “addiction scale,” far from the top ranks. The argument of some is that foods like pizza or cheesecake are addictive, and they think the cheese is the reason.

This chemical attraction would supposedly come from casein, whose digestion releases casomorphin, with opioid effect (detail).

In this article they quote Dr. Neal Barnard, who argues that «Casomorphins are highly harmful because they cause an addiction in the human brain comparable to that caused by hard drugs such as heroin and morphine. The addiction to cheese is eradicated with a treatment equal to that of any other drug that causes dependence. You need to get away from cheese to free yourself from your addiction. It must not be looked at, it must not be smelled and, of course, it must not be ingested«.

Where have we seen Dr. Neal Barnard before? Oh yeah, in the documentary What The Health. Nothing more to add.

The problem is not the cheese itself, but the combination of ingredients, being especially addictive its union with flours, in the form of pizza or pastries (detail).

That said, it is true that casein can be problematic for some people, and in recent years a recent change in milk is being investigated that could make modern casein more dangerous.

Fermentation reduces lactose, but does not alter the amount of casein, the main protein in milk, far ahead of whey. There are in turn several types of casein, being the betacasein the most abundant.

Recent research indicates that the composition of this betacasein has been changing throughout the Neolithic, in an unfavorable way for our health.

Breast milk contains mainly betacasein A2, like the milk of the first breeds of domesticated cows. But several thousand years ago, a mutation in European dairy cows raised the amount of betacasein A1. Since this mutation seemed to increase milk production, it was selected by farmers, and it spread rapidly. Breeds such as Holstein or Friesian produce more A1 betacasein, while Guernsey or Jersey produce more A2 betacasein (detail).

What’s the problem with A1 betacasein? Your digestion releases beta-casomorphin-7 (BCM7), which in people with intestinal permeability could reach the bloodstream and trigger autoimmune diseases. In fact, several studies recognize A1 betacasein as a contributing factor to type 1 diabetes (study, study, study), among many other factors that we already mentioned, such as intestinal dysbiosis, little exposure to the sun or excess hygiene.

An association has also been found between A1 betacasein and an increased risk of coronary heart disease (study, study, study).

In infants, the presence of bovine BCM7 in blood is associated with delayed motor development (study) and increased risk of autism (study). The intestine is especially permeable at birth to facilitate the absorption of certain compounds from breast milk. The risk of A1 betacasein during these first months is much higher than that of an adult (study).

It is still a field under investigation with many unknowns (detail), but in my opinion the problem is limited to people with intestinal disorders. If you think this is your case, follow the principle of evolutionary coherence, prioritizing goat or sheep cheeses, richer in betacasein A2. If your microbiota is healthy, I see no reason to be alarmed.

On my dairy scale, artisan cheese would go after yogurt and kefir but before milk. It is not a food that you should abuse, but in its fair measure it has a lot to contribute.

Try several types, enjoy it alone or as a complement to other meals. And eat real cheese, not skim. As the saying goes, the best cheese is fatty and thick.